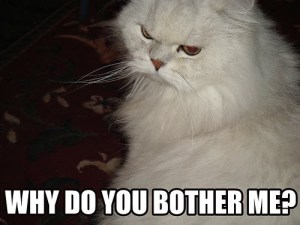 I’ll be honest, I didn’t go to IPASocial, despite the ferocious twittering around it. So i’m going to caveat these remarks with that.

I didn’t go despite the fact a lot of my friends were speaking. While I like socialising with them, I can be sociable just as easily in the pub, as well as debating the finer points of online and offline behaviour (I’d also forgotten when it was on).

Plus, as Sam rightly pointed out, for an event about social behaviour, it was unusual with its differing charges for members and non members (which I usually don’t mind, but it seemed to be against the principles of the evening; especially rule 2 – a social agenda, not a business agenda).

I’ll be interested to see whether it goes, and what happens when a brand adopts some of those principles directly from the event; that’d make a case study i’d love to find out more about.

With all of that said, I think there’s a point it might all be missing; that being ‘social’ isn’t for every company or brand.

I don’t give a stuff what most brands think about things – do I care that my bank thinks about the world differently, or cares that all of its customers are bright, shiny snowflakes? No. I don’t. I care that it’s able to manage my money, not rip me off, and not go bust any time soon. And, to be honest, i’m more interested in giving to a bank which cares about what I think it should be good at.

In fact, I somewhat admire this close minded stance for brands who offer an emotional or physical experience which is like no other brand’s. Making a virtue of sticking to what you know, and what you’re good at still creates loyalists.

And it can even live on ‘social’ networks. Look at Tower Bridge, or Henry Winter (the Telegraph’s tip top football writer). People know about them, and them not being social or responding isn’t really an issue.

I think getting too wedded to social brand behaviour is bloody dangerous, especially as 10% of twitter users generate most of the content. Yes, we’re inherently social creatures, but to our friends and family. Not necessarily to brands.

Brands – I don’t want to be your friend, I just want you to do your job, and do it better than your competition. In fact, I rather like it when that’s all you focus on. Be useful to me and i’ll like you. Don’t get hung up on being social for the sake of it.

I hate to use the ‘brands like people’ thing here, but it’s true to some extent; some brands are the life and soul of the party. Some are the socially awkward introverts who have other interests than being loquacious. And there’s nothing wrong with that.

← The Great Integration Myth…?
When is it right to experiment? →