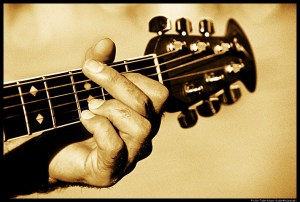 It looks like a variation on a G. Could be wrong, though.

Hello. Happy Easter, first of all. I’m enjoying the chance to potter at home, to play a little golf and reflect on the past four months or so since Easter.

Anyway, I thought you might like to know that since Christmas, I’ve begun to try to learn the guitar. Now, this is a bit of a new thing for me; I’ve never, ever learned to play any musical instrument. It’s kind of odd, especially when you consider that I love music – I’ve spent thousands of pounds on it since my teenage years.

And, well, let’s just say that it’s not as easy as it might seem, this guitaring. I’ve spent hours and hours practicing my chord changing, learning basic pentonic scales and beginning to learn bits and bobs of songs I like. Perhaps most notably – I can now play the beginning to ‘The Funeral‘ slightly slower than Band of Horses can. Heh.

It’s been fun, so far, partly helped by the fact I have no expectations (save to be able to play songs/be able to noodle). I don’t have any desire to pack it all in and become a musician, but I do find myself getting cross when I can make a chord change quickly enough.

That in itself’s been interesting; my guitar teacher’s got me using a metronome to get quicker, and that led to an admission from my flatmate (a former teacher of guitar himself) that he’d never used one. No, he’d just used his ear, and never been taught the ‘proper’ way, and wished he had, as he admitted his tempo wasn’t up to snuff, and that would’ve helped. He, like me, played to amuse himself.

Now, I want to learn the ‘proper way’, even if I at a later date I short-hand it. I know what my musical desires are (though my teacher tells me that as soon as I play with other musicians, I’ll want to kick it up a notch), and am happy enough. I’m sure there’ll come a time when I know more to challenge some of the things I’ve been taught, though.

What interests me about all of this is that I think proper practice does require proper grit; to learn things the ‘right’ way and ask pertinent questions as you go along. I’ve always wanted to learn the way it’s been done, historically – to challenge what’s been accepted as the norm, and find out when it’s useful/when it can be disregarded.

Running AdGrads, I have met a lot of graduates. Many incredibly talented, many incredibly conscientious…with the odd one that’s so talented that they’ll re-write the way the business is thought of.

What I find most interesting (bearing in mind AG’s been in existence for about 4 years now) is to track the progress of those who have been successful the first time round versus those who’ve had to work at it and those who’ve given up and done something different.

Without question, there are some brilliant, brilliant people in communications. Like my flatmate’s guitar playing, they’ve demonstrated a natural ability. But, occasionally, they get to about two years in, and stall. They’ve made it. To the average person (and client, in a lot of cases) they know what they’re talking about. Yet they’re disillusioned; they’ve put so much into the goal of getting in that there’s no real incentive to push on. They’re able to play their songs, tap out their beats and, ultimately, be a cog in a business. I think this happens most often to the planners I’ve seen – there’s no real job title change, short of getting in and on.

It’s the triers that do best in both businesses; those who can internally motivate themselves, be gritty and ask the right sort of questions. These callous-finger-tipped sorts don’t just ‘settle’ for things. So you can’t move from F to C quickly enough? Keep working. Find another way of doing it. Hum along to the song you’re trying to master to learn a better way to play it than the oft-wrong tab pages suggest to do so. When it comes to comms, don’t just accept that because you’re two years in and working in London that planner x’s word is law, or that what a client says is the way it always will be.

Get out there, meet different sorts of people, and apply some real life to situations (as Rob’s excellent post points out). Don’t just listen to Twitter or Campaign Magazine. Those promote a very ‘media’ way of thinking about the problem at hand.

It’s perhaps no wonder that the public no longer thinks that the ads are better than the programmes – so many communications initiatives are created as much to please the ‘in’ crowd as anything else. I don’t give a fuck what famous planner Y thinks of my campaign. If it met/exceeded its objectives (which, in truth, only you and the client will know), then it’s worked. It’s like this tweet; I have no doubt whatsoever that the people they wanted to talk to weren’t 20-30 something comms professionals in London. No doubt at all. So many people judge ‘the work’ not as punters, and that’s a big problem.

I think lazy judgements on the work is another symptom of a lack of grit; a lack of willingness to think about just how real people (remember them?) will behave when work like that is placed in front of them.

To take this back to the guitar again – my guitar teacher, Ryan Carr, is trying to make a go of a career as a full-time guitarist (rather than as a 50/50 teacher/guitar player split). He has a refreshing attitude to the notion of grit. On my second lesson (after buying some more kit – a capo/metronome from a nearby shop), I asked him why most people in Denmark St music shops were such dickheads. Most of them sneered like bastards when I asked some pretty simple questions about just what brand of capo I should buy. He said to me that most of them were washed up, the sort of guys who had/have some natural talent, but were unwilling to ever chance their arm and try for full time careers as musicians. He knows that he’s in a risky position, and that he’s got some difficult creative decisions to make – to the T-Mobile example earlier, just how populist does he make his music? Regardless of which way he goes, I respect him for giving it a go, and being true to what he actually thinks, and not a sneery musical sycophant.

It’s the worrysome nature of creative careers that it’s often easier to sit in the sidelines, being in with the in-crowd, going along with the popular consensus because you’re too frightened to make something happen or venture how you really feel.

And, frankly, I think that’s a bit sad. I think, for the likes of comms folk, that we shouldn’t be frightened of arguing fully for the work, about just why it will/won’t work, and be less frightened of just blithely nodding along with what famous planner/creative x says. If we don’t do that, we run the risk of sitting, working in the ad equivalent of the music shop from High Fidelity, where people wank on for hours about gamification – something, which whilst wonderful as a theory, just might not sell more bars of soap.

I like working with people who have strong beliefs. People who don’t work in a culture of fear, who say what they think and argue about the direction of accounts. People who I can raise my voice towards and go to the pub with afterwards. People who have their comms callouses, who love what they do and have tried to get better. Not people who’ve glided in, grown disillusioned and are too scared/lazy to do something about it. That’s where the best work comes from, whether it’s a song, an event or an ad.

Anyway. Back to trying to learn the Crane Wife 3.

← Consultancy with Conscience…?
Not all data’s created equal… →