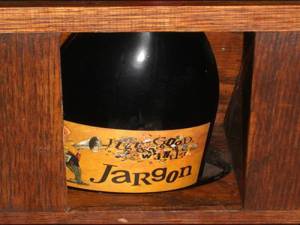 Tastes like piss, or so i’m told. Picture from PreciousKitty, usual rules apply.

I’m beginning to think that if any organisation gets to a certain size, it has to invent jobs for the boys. That is, those people who don’t really have ‘proper’ jobs, save producing the rather lovely vintage above.

I’m talking about brewing up a healthy bottle or two of jargon. Needless, pointless, bollocks talk. It’d seem that those who work in communications have come down with a particularly large measure of it. Words and phrases which really mean nothing.

Let’s look at that old favourite, ‘Reason to believe’, or RTB for short. RTB? I mean, come on. It’s phrase you’d never even contemplate if you thought about it. It implies that there is one universal reason why people buy a particular product/service or brand. If it’s a value brand, the RTB MUST be price. That’s horseshit. Sometimes it’s because people, shockingly, prefer the taste or convenience.

RTB is a terrible word as well, because it assumes oh so much. It’s a lazy shorthand for people who can’t be fucked to research things properly, or realise that circumstances and attitudes may have changed. It’s a monolithic expression, which should be consigned to the 1950s.

Another wonderful term is ‘social media’. I’ve already ranted about this earlier, so i’ll leave it alone, if only to say one thing – all media is social. Yes, even press. It’s such a wide ranging term as to be utterly useless.

Let’s have a look at another term which needs to be consigned to the dustbin. This one’s one of Sam and Eaon’s least favourite terms. Yep, it’s a ‘viral’.

For something to be viral, it has to be spread around. To call something a viral and assume it’s going to spread is hugely naive. Until it does, what you want, dear agency or client, is a short film that you hope people will watch. Mostly, these aren’t pieces of branded film. Nope, they’re things like Keyboard Cat (click the first video, it is a JOY).

Let’s have one from Cluetrain (much as I agree with lots of it), shall we? Yes, the prosumer. Like any frankenword (an unholy combination between two words which really shouldn’t ever be brought together), it deserves to beaten like the red headed stepchild it is.

Dissecting it (as the wikipedia article does), prosumer could have multiple meanings. However, the one most commonly arrived on by comms folk is to suggest that it’s a proactive consumer, who can now self publish, and will change the world. Have these people done any groups with people (you know, those people who you sell, yes SELL stuff to) in the last six months? Or ever been in the pub and talked to their mates?

I’d bet most people who don’t live in the comms industry bubble aren’t fucked when it comes to self publishing, much less behave like prosumers. Your average punter may take matters into his or her own hands now and then, but that doesn’t mean they can operate as a separate segment. People are motivated by their own ends, and more often than not, that has the square root of fuck all to do with publishing stuff on the internet.

Judge people by how they have behaved, but to assume people will become or are prosumers because of past behaviour is a fucking nonsense. Research only tells you what’s gone before, after all – people are motivated by a variety of things; by their own situation, by the environment around them – and God knows, most are passive. It’s why telly ads won’t die off, or the printed word.

There’s one underlying theme with all of these words. They are damned assumptive. Lazy shorthand for not putting the hours in. Using them means you can easily dismiss certain options, or suggest things because they ARE the RTB for our prosumers, who are engaged by social media, especially virals (!)

Nonsense. If you work in communications, and pride yourself on the ability to be able to speak directly to your audience (I don’t have a problem with the term target audience, but that’s another post), why the fuck would you use words like that? If you can’t communicate internally or to your clients, what hope do you have of communicating to punters?

The next post will be less ranty. Promise. It may even be about Glastonbury, though i’m sure you’re all bored of that by now.