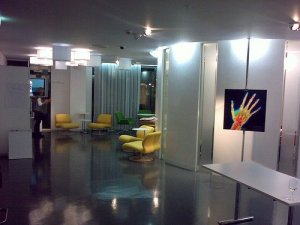 Where the silliness went down. Via TravelEden, usual rules apply.

This is something of an apology. I went to see Mark, James and Johnnie for a morning at NESTA, and promised i’d write it up. This was a month and a half ago, and my half written notes have been sitting on my desktop, squinting at me with all of the intensity a word document can.

Annnnyway, here they are. Better late than never.

Or at least, that’s what it was billed as. In reality, it was a really free form event, where we did a series of group exercises. Now, this might sound bloody terrifying, but don’t worry – I’m as much of a sceptic as the next man, and though I actually quite *like* talking in public, I’m not much of one for ‘performing’. Especially not when Sammy, Sarah, Amanda and lots of other people who i’ve forgotten about were there.

But given Johnnie’s excellent demonstrations, we were all able to get involved (even the more concerned amongst us), and learn about how different people approach tasks.

To give you a couple of examples – the first was a hierarchical, evolutionary chain, which (scarily for a bleary eyed Monday morning) involved some mental arithmetic, starting as an egg, evolving to a bird and finally a human. You could only interact with people on your level, and when you met, you had to both hold your hands up and add, really quickly. Those who got it right evolved, those who didn’t, devolved.

I loved just how people made their own rules up as they drew (it seemed to me that women in particular chose to evolve when that happened, which is interesting in itself).

What was also interesting was those people who held up the same number of fingers (or no fingers) in order to ‘win’, despite the fact there were no real parameters – it just goes to show you that people will always have that competitive spirit regardless of the situation.

For what it’s worth, I didn’t really follow the rules myself – deciding to have a count off with anyone who was around. This meant, coupled with my (decidedly ropey) mathematical ability, I climbed the ladder, but got busted down to egg status pretty quickly.

Another one of the amusing activities we were asked to do was to partner with someone of about the same height, then grab their elbows with our hands at the side, and to quote – ‘lift them off the ground’.

Now, apparently we were a very advanced group; people very quickly got the notion that you had to jump up and down, rather than wrestle them to the ground. A few clients and agencies were namechecked; apparently more than a few tried to fight each other. Heh.

There was one more exercise, where people were put in a line, and told to mimic the person behind them’s action. It was frankly STAGGERING to see how much it changed by the end, and how only the very vivid action (in this case, an arse slap, which amused us all – very Carry On) got through unscathed. It led me to think about ad agencies and actions (which is possibly the closest i’ve ever come to channeling Seth Godin) and behaviours which we should present to the client.

Thanks to all of the guys for putting it on, and to NESTA. It was fascinating. I’d go to another event (but maybe I’d write up what I thought straight away).